For all of my adult life, I have had a significant amount of emotional and mental baggage in the area of food. I have been known to say that if I even think about trying to lose weight, I will immediately put on 10 lbs. I’m not proud of this. It feels shameful. It’s a part of myself I’d rather ignore or hide. Ignore it I have, until a few months ago when I decided to raise it in a coaching session. It was a short session, but it changed the way I think about my relationship with food. I am still amazed that ten minutes could have had such a remarkable impact on me.

I guess it’s not fair to say that the change took place entirely during that ten minutes of coaching. I was ready for change, open to it. I had also developed some confidence in my ability to adapt as a result of other recent changes where I had been successful. I had been asking myself who I wanted to be in this area of food. Did I want to be someone who had a lot of emotional and mental baggage about food? Did I want to be someone who always felt powerless and out-of-control in this area? The answer was no. I was ready to stop feeling helpless.

What happened in that session of balance coaching was this – my perspective changed. This might not sound remarkable or dramatic but, in this area, it was extraordinary for me. Understand that this felt like something that was impossible for me to change. What the session showed me was that I had a choice, and my decision to choose a new mindset has had a significant impact.

A few months ago, I would never have dreamed that I would have as much freedom as I do in this area. The freedom to let go of the powerlessness has been the best part – to know that I have a choice. The measurable part is that I have lost 7 inches and 6 pounds in the last 3 months. Yes, I am exercising (but not fanatically). Yes, I have changed what I’m eating (most of the time). This doesn’t feel difficult. It feels sustainable. The difference this time around is in the way I think, and that has made all the difference. I am thrilled with the changes, not only the ones in my body but more importantly the ones in my head.

The most difficult thing is the decision to act, the rest is merely tenacity. The fears are paper tigers. You can do anything you decide to do. You can act to change and control your life; and the procedure, the process is its own reward. Amelia Earhart

I’m a writer and coach, who is passionate about helping ordinary people move beyond what is holding them back so that they can live extraordinary lives. You can connect with me here or learn more about coaching with me. 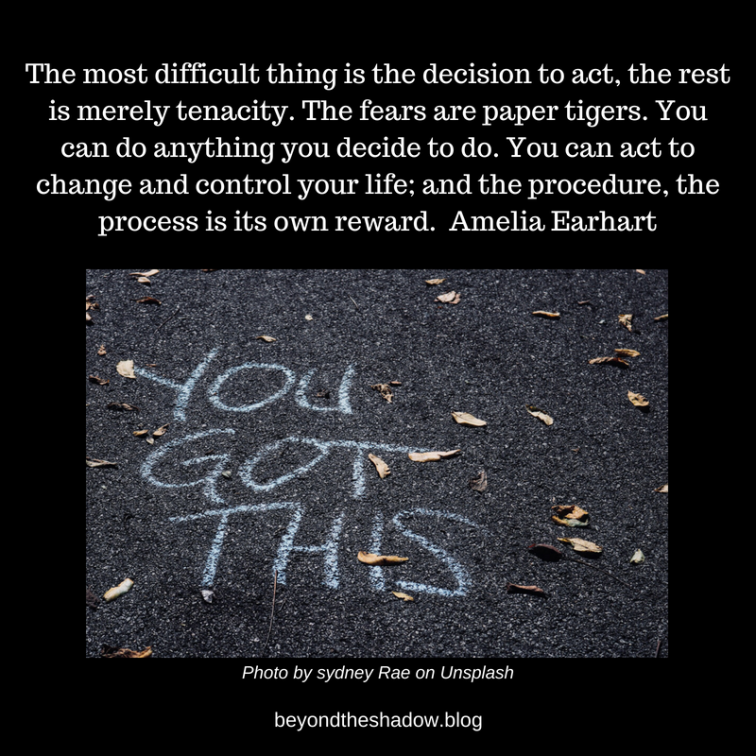 4 thoughts on “CHANGE IS POSSIBLE”